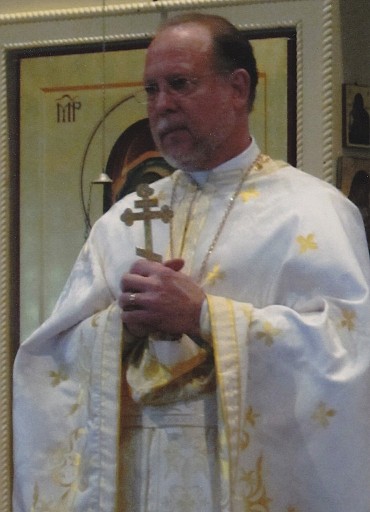 HOLY MYRRHBEARERS. TO BE OR TO LIVE; THAT IS THE QUESTION!

Recording of this sermon should be uploaded and viewable on our public Facebook page, and on our St Herman's YouTube Channel.

The Gospels for these last two Sundays set before us original experiences of Jesus’ Resurrection. And in the death and resurrection of Jesus, we see that ‘reality’ is something completely different from the philosophical and scientific understanding that has shaped our minds.

To wit: ‘to be’ is not the same thing as ‘to live’. One can ‘exist’ and ‘be’ dead. To be or to become are the principal categories of ‘reality’ in philosophical thought, and in somewhat different form, of science, the child of philosophy. But in Holy Scripture, the principal categories of ‘reality’ are ‘to live’ or ‘to die’. Following Solomon, to live is to ‘exist in the salvation of God.’ (Wisd 1.14)

The hope of the faithful Israelite wasn’t ‘to be’ but ‘to live’. For him, ‘to live’ was ‘to be’ in God. He didn’t know this as an intellectual concept. He knew it from experiencing the mystery of God in faithfulness to the commandments of God and in the worship that God revealed to Moses on Sinai. Through faithfulness and worship, the faithful Israelite entered into the presence of the living God. And this was an overwhelming experience.

Therefore, for the faithful Israelite, even though he knew his ‘end’ was to die and return to the dust, yet his experience of God was that of existing in life because he existed in God, who, as the LORD says to Mary and Martha, is Himself, ‘The Resurrection and the Life’ (Jn 11.45). In the love of God, the faithful Israelite’s hope that even though he died, yet somehow he would live, was experientially real.

The faith of the Church that she knows, is that this God is Himself the very LORD Jesus Christ. Through His birth of the Virgin in the flesh, this God has descended to where we are, into the prison house of death and corruption where we were cut off from God, from which there was no escape. This, to be cut off from God, is what it was to be dead for the faithful Israelite.

The Law of Moses was but the codifying of Abrahamic faith. It gave concrete form to the Israelite’s hope of somehow being restored to fellowship with God and thereby to life through faith. Even so, as we see in the witness of the prophets, the faithful Israelite who was sensitive to his ‘inner man’, as St Paul describes it in Rm 7, had the experience that his heart was hard and cold, lifeless, like a stone. No matter how much he may desire it or attempt it, he simply could not on his own strength maintain himself in faithfulness to God. Something in his heart always inclined him to idolatry, to disobedience, and this was for him the inner testimony that even though he ‘existed’, he was ‘dead’ and not wholly ‘alive’ in God. And yet, through the Law of Moses, in the faith of Abraham, he lived and died in the hope that somehow God would create in him a clean heart, a heart of flesh in place of the heart of stone.  This was a real hope for it was revealed by the LORD Himself to the prophets. We hear it, for example, in Ezekiel, whose vision of resurrection from the dead we read on the evening of Great and Holy Friday, after we have come back into the Church and are standing in front of the corpse of Jesus at the Tomb. Understand, then, that this Jesus whose corpse was in front of us inside the Church on Great and Holy Friday, and whose resurrection the Church proclaims, is the same LORD who revealed to the prophets before His Incarnation the mystery of His death and resurrection!

The myrrhbearers make their way to the Tomb early that first Sunday morning, and wonder who would roll that stone away from the tomb. When they draw near, it says, they ‘looked up’ and ‘beheld’ that the stone, which was exceedingly great, it says, was rolled away. That stone represents the door of the prison house of death from which there was no escape! What, then, does it mean that the stone has been rolled away! Who rolled it away? Except, we know from the Psalmist (Ps 106 LXX) that the LORD did not roll the gates of hell away. He shattered them! He destroyed them!

And what does it mean when the angel says to the myrrhbearers: ‘This Jesus of Nazareth you’re seeking is not here!’ There was supposed to be a corpse in that tomb. It’s not there anymore. What happened to it? Where is it? Here’s the point of those liturgical texts: if you deny the resurrection, you have to account for the disappearance of that corpse. And if you want to say the apostles came by night and stole it away, you have to explain how they could sneak past if not overpower the guards. But, of course, not even this is sufficient to prove the resurrection of Jesus to the stony heart. As a corpse itself, spiritually dead, the stony heart is blind and deaf to anything that comes from heaven.

‘He goes before you into Galilee,’ the angel says. What does this mean? It may well be that the angel is taking us up into Ezekiel’s vision (specifically, chptr 47), to that ‘snow-melt’ river, the cheimarroun, that comes forth from the East Gate of the Temple. It flows, it says, into Galilee all the way into the desert, an image of death, all the way, it says, to the outlet of the water—the gates of death? And, it says, it shall heal the waters and every creature it comes upon it shall heal, and they shall live. (Eze 47.8-9) So, ‘He goes before you into your everyday life, all the way into your stony heart where you are dead. Receive Him in faith and in love, and your heart will become a heart of flesh, and you shall live.’ That is, one knows that Jesus is risen from the dead not through philosophical reasoning but through the experience of inner transformation!

On this next Saturday, the Saturday of the Myrrhbearers the Church sings out: The sweet scent of the risen Christ has filled the universe. Catch the beauty of the divine irony! The myrrh-bearers came to the LORD’s Tomb, having prepared aromas and spices to cover the stench of the dead they expected to encounter. Instead, the sweet fragrance of the LORD’s resurrection covered them and it throws them into an ek-stasis. But, unlike the maenads of the Dionysiac orgies, they don’t become mad and murderous. In their fear, they flee and they say nothing to anyone, for what they encountered—the LORD’s resurrection from the dead, destroying death by His death and giving life to those in the tombs—is beyond words. Philosophical reasoning and scientific demonstration have no way to account for it. Surely, what convinced the disciples that the myrrhbearers were not mad, as they originally supposed before they themselves saw the risen LORD (e.g., Luke and Cleopas on the road to Emmaus), was that the myrrhbearers were extraordinarily sane, even covered by a sweet fragrance not of this world, following the liturgical text.

So also, when we deny ourselves and lose ourselves to the death of Christ, that’s when we begin to live. The stench of death that was in us is chased away and we instead are covered by the sweet scent of the LORD Jesus Christ risen from the dead!

That sweet scent of the risen LORD Jesus Christ infuses His Body and Blood that we eat and drink in Holy Eucharist; it infuses all the sacraments of the Church, which is His Body. It is the sweet fragrance of healing and life. But it is not discovered by philosophical logic. It is discovered, it is seen, only as one begins to live in the death of Christ through obedience to His commandments in the worship of His Holy Church.

The death and resurrection of Christ is the fulfillment of the faithful Israelite’s hope. It resonates, experientially, in faith, with the Israelite’s hope that somehow he will live even though he dies in faithfulness to God. The inner experience of the faithful Christian, then, is the same as that of the faithful Israelite. We know we will live, even though we die, because we can experience the Resurrection of Christ active within us, healing us deep within, transforming our heart into a heart of flesh; and so we experience our ‘death’ as the final ‘leg’ of our Exodus into the Land of our Inheritance, the Kingdom of Heaven. Amen!